Research on the wide application of combination weigher weighing technology

Research on the wide application of combination weigher weighing technology

With the continuous development of technology, the application of a combination weigher is becoming more and more extensive, and the market scale is gradually expanding. In order to help more users understand what is the multi-head weigher weighing technology, the application of combination scale weighing technology is analyzed from three aspects of hardware, software, and testing. Compared with the traditional single weigher, the combination scale has better accuracy, Faster speed, and better weighing effect. Although the development and application of multihead weigher in my country are not long, with the continuous maturity of the technology and the deepening of scientific research, the current development prospect of multihead weigher in my country is very broad, which provides strong support for the development of enterprises.

The typical multihead weigher is shown in Figure 1. Its composition structure is mainly the loading tray, the main vibrating tray, the sensor, the collecting hopper and the single-chip microcomputer. The single-chip microcomputer is the core component. It can convert the analog signal of the sensor into a digital signal, then combine the weights, and then issue control commands. The working steps of the multihead weigher are as follows: feeding → dividing → buffering → weighing → combined calculation → sending instructions → opening the material door → unloading. 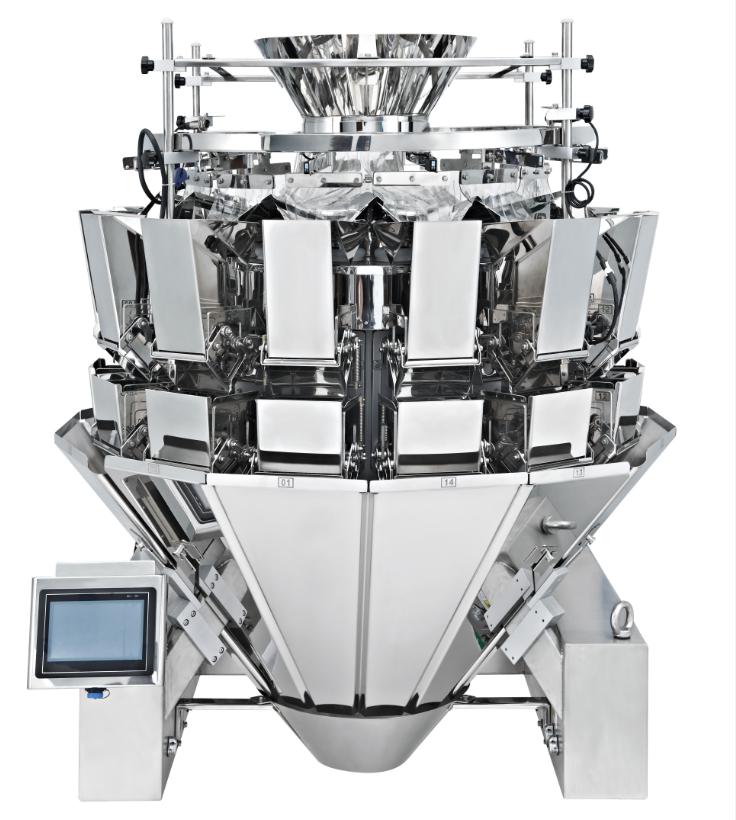 Now take the common combination scale on the market as an example, the technical indicators are as follows: the number of collecting hoppers is 16, the weighing interval is [0.01-3], the unit is kg, the accuracy is 0.5g, and the hopper capacity is 18L.

In order to ensure the accuracy of weighing, it is necessary to pay attention to the selection and design of load cells. The load cell contains an elastomer, which can transform the force into deformation, and then from the strain gauge to the change of resistance, but because the resistance change is not obvious, it is necessary to use the conversion circuit to convert the resistance change into a voltage change to complete Weighing work. There are also issues related to the state of the bridge, such as 6 resistors, R1=R2=R3=R4=R5=R6=R, the power supply voltage is UE, the output voltage is U0, if it is in a single-arm working state, there is only one The resistance plays a role, so the last calculated voltage is divided by the number of total resistance, that is, U0=UE/6×△R/R. If it is in the half-bridge working state, that is, the three resistors play a role, the calculation formula is U0=UE/2×△R/R. If it is in full-bridge working state and all resistances are in effect, the calculation formula is U0=UE×△R/R. Because the signal of the sensor is weak, a transmitter is needed. When the sensor is powered, the output range can be adjusted, and the anti-interference ability is strong, and it will not be affected by the surrounding environment and noise.

In data conversion, you can use the ADS158 chip, set to 16 single-ended input, using ±5V voltage power supply, the analog part uses +4V voltage, and the digital part uses +3.6V voltage. When converting data, you can use the automatic scanning method to set the channel to be measured in the register, and the sampling rate can reach 24ksps. After the crystal oscillation circuit is started, after the input signal is amplified, it is modulated and filtered by the AD converter, and finally enters the single-chip microcomputer through the SPI interface. It should be noted that the application effect of the combination scale measurement technology has a direct relationship with the system's CPU, so when choosing the CPU, we must pay attention to the quality, speed, and price of the chip. When designing the power supply, to avoid interference between the circuits, it is necessary to provide power separately, and the external DC voltage is large, so it needs to be processed by the chip.

In addition to the hardware selection and design, the effective application of combination weighing technology should also pay attention to software system issues. For example, the operation interface is clean and beautiful, the operation steps are simple and easy, and the entire weighing process should be automated, and the parameters are displayed to the operator in real-time so that it is easy to find problems with the combination scale. Because in the actual production and operation process, people mainly have different requirements in terms of speed and accuracy, so the calculation of combination scale weighing technology is divided into two types: high-speed type and high-precision type. In terms of speed, after the program starts to execute, the calculations are carried out in a fixed order. If a combination is found to be within the error range, then this combination needs to be output before subsequent calculations. Because the calculation amount involved in this calculation method is not large, the calculation can be completed in a short time, so the weighing speed of the combination scale is guaranteed. From the perspective of accuracy, all combinations need to be calculated, and similar combinations or combinations with the same result are compared, and then a combination with a relatively small deviation is output. This type of calculation result is basically consistent with the actual weight of the weighing object However, it takes a long time and is suitable for weighing expensive and rare objects, such as weighing some precious medicinal materials or weighing some rare ores.

When collecting data, because there are 16 separate single-ended inputs, we simulate according to IN0 ~ IN16, use INCOM as the input terminal, start data transmission, when the pin is high, you need to adjust the direction of the converter, To prevent data transmission from falling into a stagnation state. When reading the data, you can directly read it. At this time, the data of the IN input pin is 000, and you need to read the middle byte and the high byte in order from the low byte. The positive and negative of the input voltage are used. 0 and 1 indicate.

When testing the multihead weigher, we should consider the effect of the test conditions on the results. Put the weight in the hopper. When weighing the weight, you can change the weight of the weight and observe the changes in the data. As a simple example, if the combination scale is unstable during weighing, such as shaking, the data will fluctuate in a small range, which will affect the accuracy of the result. We take a 1000g weight as an example, put it on the hopper, and then observe the weighing indication at different time points. At 8:00, the indication is 999.87, and the error is -0.13; at 9:00, The indication is 999.92, the error is -0.08; at 10:00, the indication is 1000.07, the error is +0.07; at 11:00, the indication is 999.95, the error is -0.05. It can be found that the results obtained by this test method meet the accuracy requirements. However, in the actual operation process, the vibration and noise of the factory are large, which will cause a great interference to the combination weigher, so it is necessary to isolate each module of the combination scale, supply power separately, and then output the signal in a differential manner, and use high quality The shielded wire is used as a conductor. If conditions permit, you can also configure a photocoupler or connect a decoupling capacitor to absorb the energy generated by the circuit.

In summary, in the specific application process, the combination weighing technology can be automated, and it is convenient for the staff to observe. At the same time, the measurement accuracy is high, and it can well meet social needs. However, it should be noted that there is still a lot of room for improvement in specific device selection and hardware and software design. It is believed that in future development, combination weighing technology can continue to innovate, and enterprises can manufacture and produce higher quality combination scales to promote social progress.

On the basis of digesting and absorbing foreign advanced weighing technology, domestic combination scale manufacturing enterprises have already possessed the technical ability to compete with foreign combination scale enterprises on the same stage through innovative development. And Guangdong Kenwei Intellectualized Machinery Co., Ltd. is one of these representative enterprises. Through more than 10 years of development, Guangdong Kenwei has established a perfect multihead weigher product line, which is widely used in food, medicine, chemical, hardware, daily use, etc. Industry, and exported to more than 90 countries and regions around the world, continuously improve the economic benefits for more than 1500 customers, is the best choice for the majority of food processing companies to automatically weigh and improve economic benefits.