Abstract: Aiming at the problem of low precision and poor timeliness in the traditional combination scale weighing system when weighing uneven materials, a new intelligent combination scale weighing system is proposed. The weighing system features a multi-head combination, a high-precision load cell and a high-resolution A/D converter. At present, Guangdong Kenwei and Highdream are the representatives. The photoelectric detection unit and vibration mechanism designed by them greatly improve the accuracy of dynamic uneven particle weighing. The fast digital filtering algorithm is used to improve the measurement speed. The simulation data and experiments show that the design of the weighing system effectively adapts to the weighing process of uneven materials, effectively improves the accuracy and timeliness of weighing, and meets the actual needs of production.

In recent years, the rapid development of science and technology has led to the rapid development of industrial production, and the demand for combined scale weighing systems in the food industry such as small and medium-sized packaging has become more and more demanding. The traditional single-weighing packaging scale has the disadvantages of poor anti-interference ability, slow packaging speed, low packaging measurement accuracy, high power consumption, etc. and for single or uneven materials, the monomer is called The packaging scale cannot accurately measure the quality of the material, resulting in an increase in the failure rate. With the development of computer technology and microelectronics technology, more and more researches on weighing systems in this area have been made, and automatic weighing systems with precise ingredients, high reliability and strong anti-interference ability can better solve these problems. And significantly improve production efficiency and economic efficiency. 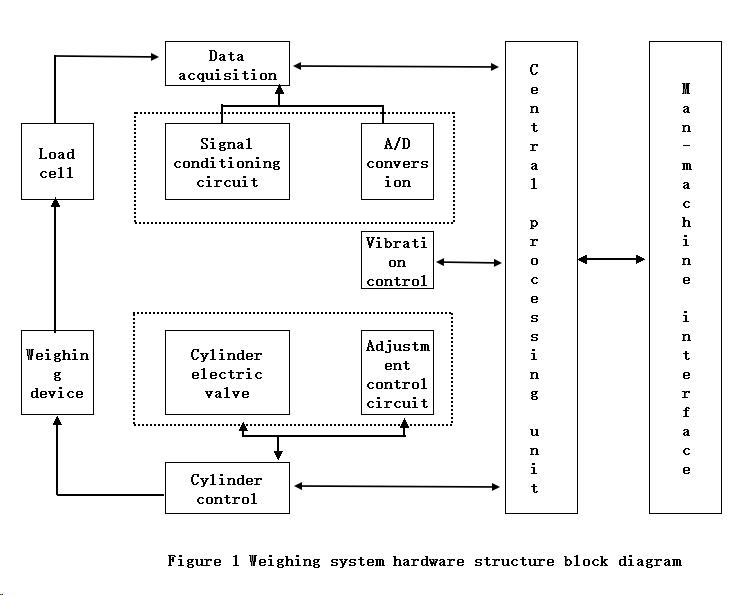 The central processing unit uses a 32-bit ARM processor and is the control and data acquisition hub for the entire weighing system. The central processing unit realizes the entire weighing system by using the information exchange with each detection part and the actuator, and the communication program of the human-machine interface. The vibration motor adopts the PWM control program, the cylinder adjustment control program, the A/D conversion and the calculation program. intelligent control. The central processing unit monitors the condition of the material in real time through the detection of the photoelectric switch, and adjusts the amplitude of the vibration motor to ensure that the material of the preparation hopper is sufficient; the quality of the load is converted by the load cell, and is converted into a voltage signal by signal conditioning and A/D; The voltage signal is calculated by the central processing unit and converted into a digital quantity, which is displayed on the man-machine interface.

The system uses a non-contact photoelectric detection switch to control the vibratory feeder. When the photoelectric detecting switch detects that the material in the line vibrating plate is not enough or insufficient, a feeding signal is sent to the central processing unit, and the central processing unit sends a feeding signal to the material conveying machine until the photo detecting switch detects the material. Then start the vibration motor, adjust the appropriate amplitude and vibration time, and send the material to each hopper.

The cylinder control part realizes the pneumatic telescopic gas rod work. Open the hopper door and send the material to the weighing hopper. The central processing unit realizes intelligent control to complete when the cylinder electric valve needs to be opened or closed, so that the system can accurately complete the weighing process.

In the weighing hopper, the material is mass-produced by the load cell and then transmitted to the main board of the control device via the lead. The central processing unit reads and records the quality of each weighing hopper, and then calculates, combines, and combines to select a combined weighing hopper that is close to the target mass. When receiving the request discharge signal sent by the packaging machine, the central processing unit sends a signal to activate the weighing bucket motor driver, opens the selected weighing bucket, and unloads the product into the discharge hopper to enter the packaging machine.

Considering that the electromagnetic field generated by the electromagnetic vibrator coil has an influence on the A/D sampling, when the load cell transmits the material quality to the signal conditioning circuit, the A/D sampling module is added with a shield for magnetic field shielding . After a series of programs such as amplification and filtering, A/D is converted into a digital quantity recognizable by the central processing unit, and the median average filtering method is performed by the processing unit , and the large value and the small value are eliminated to find the average. The value is taken as the final sample value. The data collection flow chart is shown in Figure 2. 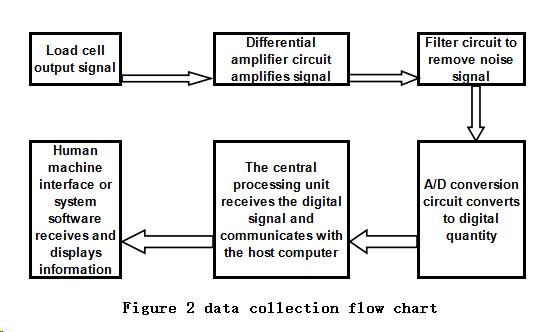 This weighing system uses a touch-screen LCD screen and develops a user-friendly interface with its own software. The operation of all functions of the symmetrical heavy system and the amplitude adjustment of the vibration motor can be realized by touching the screen. By touching the screen, the operator can see the time and quality of each weighing on the information bar, which is easy to operate.

Due to the influence of the external environment and its own conditions, the input-output of the strain gauge load cell used in the system is nonlinear [6], so the sensor needs to be calibrated and corrected. The weight of the calibration quality value is placed on the sensor tray in turn, and the quality is displayed on the information bar of the screen. According to the deviation from the calibration quality value, the deviation value is input into the text column corresponding to the initial calibration. After the inverse model correction, the system performs calibration conversion and completes the calibration process.

2 The appearance structure of the weighing system

The intelligent weighing system adopts the vibration feeding design . It has the characteristics of large storage hopper, combination scale, vibration mechanism and photoelectric detection. It can realize the weighing method of uneven material size and has accurate weighing effect. . The weighing system is 84 cm long, 124 cm high and 65 cm wide. It uses photoelectric detection materials. The vibrating plate with vibration motor is installed on the bottom. The guard rails are designed on both sides to prevent the material from falling out. The middle part is four. The principle of the combination scale, the scale of each scale is 2 kg; 4 preparation hoppers are placed. The material flows through the stock hopper to the four weighing pans for accurate calculation. After discharging the gas rod, the material is pushed to the unloading hopper for packaging. 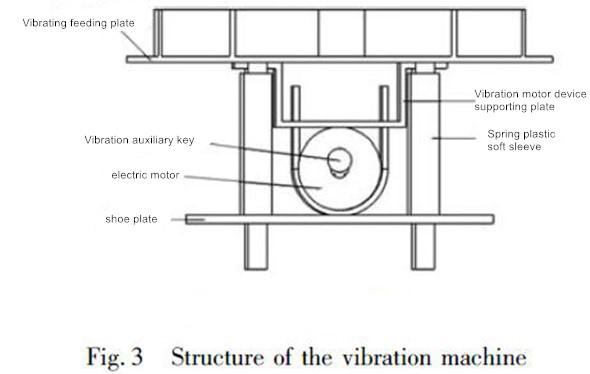 This vibration system is equipped with a help button on the rotating shaft of the motor to cause strong vibration under the rapid rotation of the motor. The vibrating motor unit tray and the vibrating feed tray are fixed by welding. A spring is mounted in the spring plastic soft sleeve to support the vibrating plate and enhance the vibration effect.

5‰ By the measurement and analysis of the uneven weighing data of the combined weighing system, the actual mass of the weighing unit is used and the data is simulated using Matlab, the accuracy is 0. 5‰. The standard quality of the weighing test and the corresponding actual weighing results are shown in Table 1. 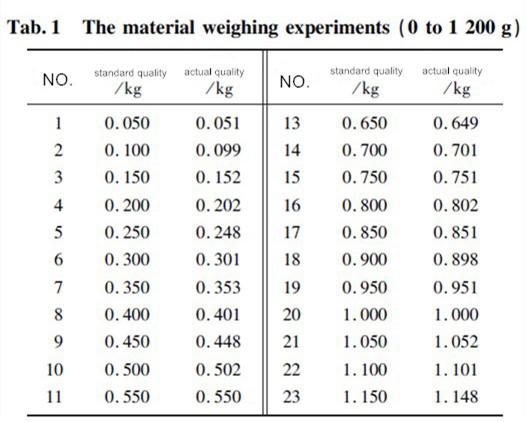 According to the above data, a suitable relationship between the standard quality and the actual weighing quality is established, and the fitting curve between the two is obtained, thereby realizing the calibration of the data. Through testing, both standard and actual weighing quality have a good linear relationship in both uniform and uneven materials. 4 Conclusion     After testing and testing, the weighing system is accurate in measurement, the photoelectric detection material is sensitive, the material volume vibration adjustment speed is fast, and the weighing accuracy meets the expected requirements. The weighing system can improve the production efficiency of small food packaging manufacturers and improve economic benefits; it has reference value for the development and design of some automatic weighing systems in areas such as uneven weighing and slow speed.